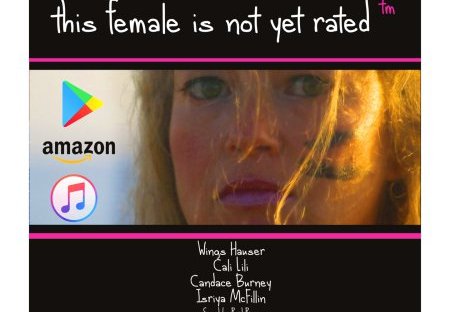 Song from the #DebutAlbum by #CaliLili™

Soundtrack to the #Indie #MotionPicture

” I don’t know where my songs come from but they always told me where to go.
I rode the songs in like a wave.
I wrote my first lyrics on NYC subways, planning to almost “rap” them, like poetry.
My childhood home was troubled + even my choice of music was an act of rebellion against a family that considered “classical” music to be the “only” music.
NYC was like my playground and I spent as much time away from home as possible … listened to alternative music stations like NPR – and discovered that my “odd” ideas about music weren’t so odd after all.
My teachers were always amazing to me. I was like a “runaway with a scholarship” – escaping the challenges of an abusive childhood home, while embracing the wonders of learning new things every day. I got skipped several grades, so I was always the youngest in the class and a bit of a “lone wolf.”
Training as a dancer and actress, I had no “instrument,” beyond my body, my voice and “percussion-words.”
I “took dictation” from where-ever these lyrics seemed to “originate.”
Sometimes they showed up in dreams, fully written.
I’m a multi-cultural “Island Child Gone Wild in the City” ™ so “the beats” were there for me in every syllable, soaring guitars underneath.
Beats, heartbeats, indigenous roots soul beats, syncopations from global girls in global cities – global streets – NYC, City Of Angels / L.A. , Sao Paolo / Brazil, Japanese Taiko – and – always, always on my mind and in my heart : Africa.
Bits of alternative chords and multi-cultural percussions accompanied definitive words, but I can’t read/write music, so I was “locked out” of what i call the “musician’s locker room.”
Baffled and intimidated by the idea of writing music to my lyrics, sometimes “triggered” by traumatic childhood incidents, I sought “music” for my lyrics. I knew that water was my “hood,” I was born on the water, as much as i adore NYC, my soul longed for water . So, I “caught a wave” for Cali.
As I began working with my “buddy” in Los Angeles (iconic actor/musician Wings Hauser) my NYC notebooks filled with lyrics, hints of music, fragments – found their home with his melodies.
Sometimes I read him the lyrics first and other times he played melodies that were instantly recognizable to me, as the destined partner for certain songs.
My primitive fumblings for musical concepts “haunting” these lyrics were now finally “accessible.” As we developed the songs, I could “channel” ideas for which I previously had no vocabulary. “Shaping” the songs – my voice followed. The beats showed up again and they brought me home on my “Island Child Wild™ ” Wave.

From my high-school design, my tiny, sustainable, ecologically responsible IndiGoGreen™ studio in #VeniceBeach was hand-built . Cali Lili Indies ™ Pictures Words Music in Motion™ feMt0™studi0 VenusBeach ™ Cutting Edge Of The Pacific ™ is an enchanted “green space” in harmony with BluePlanetGreenSpaces™ where my team and I create “Fempowered™” “Socially Responsive ™” films, albums, and books.
My aim is to “nourish” through my “pictures words music in motion ™”
The screenplay for my movie ” eVe N’god this female is not yet rated ™ ” was “born” as a “twin” to the album. I knew these songs would become the Soundtrack for the motion picture. I’d never produced any music before so I was super nervous about that responsibility.
Once #WingsHauser and I got these songs up and running – once again, the songs told me where to go.
I just seemed to “know” in my body – and in my heart – exactly how to produce this album. Orchestrations and arrangements seemed to be clear to me in my own newly found “language” … but still I’d need to find my ideal team.
Magically, my team showed up right on time. AWESOME Ohio Engineer, #ReidRice seemed to magically appear in L.A for me ! Thank You So Much Reid – I couldn’t have imagined better.
The AMAZING musicians who joined us on this journey, seemed to also magically just “show up.”
Each one of these artists connected with every song and brought me something from the heart of their brilliant abilities :
#PaulTokarz from Headless Robot Band – showed up in L.A. with his Baltimore Knock Down Brilliance / Heart and Soul Brilliance on Guitars – acoustic and electric
#EdiRoque, In Rage Entertainment, Master Guitarist from #Brazil, now in L.A. with his beautiful and super-smart wife Julie, had originally contacted me thru facebook when he was still in Brazil ! He had seen my music video ” #ElectionTrain ” and we began corresponding for two years … magically and just in time for this Album – Edi was in Los Angeles with his Virtuoso Genius on Guitars – acoustic and electric.
#KristenGleesonPrata from #BORNS band, was thrilled that I told her I wanted to experiment with multi-cultural global rhythms and when I said I wanted to create my unique “TrashKit™” ( my drum kit made with Trash Cans and Plastic pails) she was transported back to being a kid – which is what I am when it comes to Rhythm – I’m hooked. We had a blast – I am so grateful to Kris not only for being so open to my crazy ideas but of course – for providing us with her Spectacular Drums and Hand Percussion
#MarkCassidy from the Get Down Boys and #Hillbenders , I promised him “ham sandwiches” with every session and he brought his Jawdropping brilliance on Banjo and Mandolin as well as his tremendous style to every moment of this work.
#DonnaSchwartz Master / genius – showed up just in time from NYC – and we were all floored by her Extraordinary Sax and Horn.
#SeanNelson – Truly a Master on Keys – his rig was three times the size of our space and it was worth it !
#SteveShuster – was kind enough to join us with his deep soul on Bass at a time when he had just become a new father … and we so appreciate that soul in this album !
The songs told us where to go.
We rode the songs in like a wave. ” © CaliLili™ #AlbumNotes all rights reserved

StayTuned for much … much more.

You can join our movement :

by simply buying the album and movie, adding tracks to all your playlists, helping to share news of this one of a kind project …

our projects are #NoBigDough™$ and yet they support artists, techies, and craftspersons in this era of Big-Money-Media …

Thank you ! We Love you ! #WeMadeThisForYou !